JOHANNESBURG, May 11 (Reuters) – South Africa’s rand weakened on Monday as optimism over the global economic recovery faded, with investors turning back to safe haven assets as a second wave of novel coronavirus infections hit South Korea and Germany.

At 1500 GMT, the rand was 0.22% weaker at 18.3700 per dollar, having touched a session-best 18.2260 in early trade before the New York saw investors tempering their expectations of a quick recovery and backing out of risk currencies.

South Korea warned of a second wave of the virus as infections rebounded to a one-month high and new infections have also accelerated in Germany.

“A second wave of the disease is seen as a key risk. Additionally, if support measures, particularly monetary stimulus, are withdrawn too quickly, the coronavirus induced economic slump could morph into a broader financial crisis,” said chief economist at Investec Annabel Bishop in a note.

“The rand is likely to remain volatile, highly susceptible to international events,” Bishop added “It is still a long way off early March levels, and further retracement will depend on a much greater subsidence in global risk levels.”

The rand eked out gains alongside other emerging market currencies last week, moving further away from the peak above the 19.00 psychological mark earlier it touched in early April, but lingering concerns over the local economy kept the rally in check.

The announcement that government will increase the amount of debt on sale at its weekly auctions by nearly 2 billion rand to cover the stimulus package announced by President Cyril Ramaphosa in April has also kept those concerns in view.

The stock market softened after a strong close last week as a rebound in coronavirus cases wiped off the optimism of economies restarting globally. 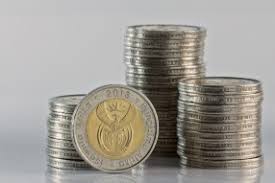